Some new things that could be addressed in the next version

I was one of the testers for Midi Guitar when it first was developed. I have used it for some time on my computer and iPad with a few different interfaces over the years. Recently I have thought about using MG in my live setup when playing live.

I have been following the news of the up-and-coming MG3. I have had some thoughts on some things that might be good to put into the next MG.

The first thing that I would like to see is the improvement in the interface of some plugins. Some of my plugins don’t display correctly. for example, TH-U and Fractal reverb only display part of the plugin interface. I would like to see the display of more plugins fixed in the next MG version.

The next thing I would like to see is adding more plugins to be recognized by MG VST scan. I have some NI plugins and MG will see Massive but misses Absynth and FM8. it also misses some of my favorite old plugins like Korg legacy and Dimension pro. the improvement of the VST compatibility would be a great help.

A very cool new feature would be the ability to add 2 plugins at the same time and mix the to make some new sounds.

Another issue I ran into is the cab sim section only sees so many of my IR’s and that is kind of limiting sometimes. The same would go for my Reverb IR’s.

I selected my SFZ folder and all the sfz samples show up as instruments but do not load when selected. a good idea would be to build in a sound fonts player to make the SFZ a playable instrument.

TH-U and Fractal reverb only display part of the plugin interface.

Can you be more specific to give a useful answer: are you Mac or Windows or iOS? And what OS version?
I use Windows 11 22H2 and TH-U is displayed correctly: 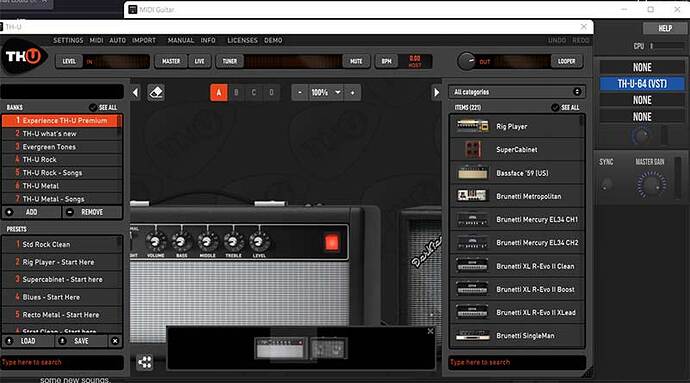 Perhaps there is a conflict with your graphics card configuration.

adding more plugins to be recognized by MG VST scan

All my hundred of plugins are recognized, I must be lucky !
I know that i.e. Absynth and FM8 have stability problems and huge cpu load with various software.

the ability to add 2 plugins at the same time and mix the to make some new sounds.

As Mizmiz says, using a daw or a plugin host can solve the problems you have and allow you to do even more with MG.
Also, using multiple cores will make the cpu load lighter.

Remember that MG is basically an audio-to-MIDI converter, and even if the developer has also provided it with “plugins-mini host” functionality, this should remain as a plus to make it an easy-to-use stand-alone tool.

The addition of multiple slots for VST, VSTI, sample and IR players etc. would make it a much more complex gas factory to develop while maintaining seamless system stability.

I have personally adopted the solution of integrating MG into a plugins host (Gig Performer) which allows me to have a single open application in which I use as many effects, amps, virtual instruments and sample, audio or midi players as I wish.

I solved most of my issues with setting my video scaling back to 100% I had it higher to make it easier to see things. I also started to run MG2 full screen.

I found a free VST host That is very good at Element Modular Plugin Host | VST Plugin Chainer and Effects Rack (kushview.net) It is also a plugin that will allow you to stack VST instruments in MG2. you can also select it as an effect and run some more complicated effects chains. you can run it as a host app and use the MG2 plugin as a midi input and make some interesting instrument and effect routings. patch changes are more immediate when you do it this way. you can also have multiple instances of MG2 in one patch.

I have been using Gig Performer it is a much better live performance tool but if you are short on cash Element works great and will get the job done.