Hi,
MG does not translate pitch bends correctly. An unmodulated straight synth sound (saw wave) held over four bars with various pitchbends (setting 2 up down, both on synth, keyboard and MG), properly exported as mono wav file (playback 1:1) is translated by MG as a number of different notes with velocity values each and irregular note values plus erratic pitchbends. 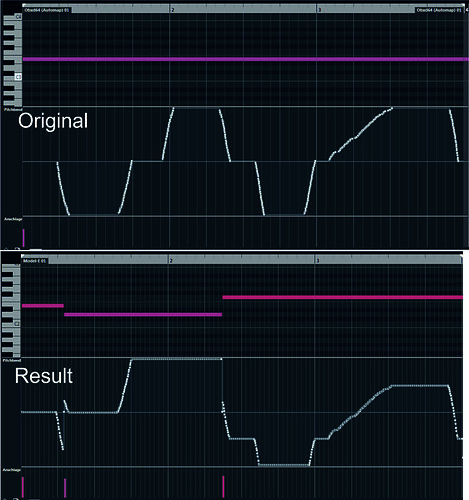 You need to set the pitch bend range to match that of your synth.

The MIDI protocol doesnt have an absolute notion of pitch bends/pitch wheel. MIDI allows a synth to define whatever range it wants. MG has no way of knowing what range the synth is using, so you need to set it.

I know. Both ranges are identical - +2/-2, so this does not explain the erratic behaviour. Even if they were not the same range, it would not explain the creation of new notes!

Are you trying to track a synth sound rather than guitar?

@JamO
Not really. I tried tracking both, monophonic and polyphonic Guitar wave files and encountered the problem when trying to use the resulting midi file on a VST guitar respectively a synth sound. Pitchbending is simply not translated correctly.
Next I recorded a simple synth tone of four bars, using the pitchbend wheel (+2/-2) (comp. image) re-recorded it as midifile using MG (also +2/-2) . The result was the 2nd image jumps and inexplicable bend values.

Ah, so you produced a synthetic “guitar” with a VST and the pitch wheel, and pass it through MG to compare the two.

Obviously MG was trained to track real guitar playing and generally performs bad if you feed it synthetic sounds. Do you feel problems also when you play a real guitar?

Yes it’s 2.2.1.
What I am trying to do is the following:
I have lots of recordings of licks and riffs of my deceased lead guitarist of 50 years or so. I want to preserve these in new songs I am writing. To do so I would often have to transpose them, which is much easier in midi format. VSTi guitars have become so good of lately that they can offer quite serious results. Since I am a keyboardist I use the wav-files of these recordings to feed MG and was hoping to get usable (e.g. convincing sounding bends and vibratos) stuff.
Obviously MG demands analogue input and misinterprets digitized wave forms. I’m not giving up yet. Maybe I give it a try by re-recording those licks on analogue tape. Perhaps this will make a difference.
I would be grateful for some input by the developers.

When mixing in a daw, you use the wav file of the previously recorded guitar to trig the midi track through MG2 plugin, and this wav file does not pose any problem but… provided that it has been recorded from the beginning for a conversion in midi, thus with the technique of play and the suitable settings of guitar (see in this forum the posts relating to the guitar technique for triggering midi data).

On the other hand, your guitarist’s recordings were not made for the purpose of converting to midi, so they will have all the usual “defects” that I am the first to encounter when I play on MG2: ghost notes, unwanted pitches and so on.
I can record a midi track pretty well using MG2 but it doesn’t work at all when I take old audio tracks from my guitar that I want to convert to midi.

This can only be corrected by cleaning up the midi tracks and correcting the defects either manually or with the midi transform functions built into most daws.

@Herold Thanks for your input. I’ve come to realize as much and have already been quite successful by cleanig up the midi track manually. It’s quite a job, but well worth it. I was hoping that MG would make it much easier, though.

Good luck, it will be worth it for both the practical and emotional aspects.

As for MG2, it does most of the work but there is no secret: it does what you give it. It is not magic, it is “mechanical”. But what is magic about MG2 is the emotion you get from playing with it.