I have the latest version of Midi Guitar and Synthmaster One (AU) running on an iPhone SE (2020) and i experience CPU overload when using the patch PAD to the moon ARK. Everything else on the phone is turned off, flight mode, no wifi. In MG Synthmaster and reverb is the only instrument and effects in use.

The first two days everything worked great, then this morning it started glitching again and i was pretty surprised to see the fastest iOS CPU kneeling.
Again, the same setup, Synth and reverb, nothing else active or running.

This is not a new issue, I used to have MG on my iphone 6 the same setup, but kept getting glitches and the CPU maxed out when running the same patch in synthmaster. I thought the CPU was too slow and bought the SE with the fastest CPU available on iOS devices. Still the same problems.

Load as an instrument
Load as effect in Instrument, Master or Guitar
Midi Machines: Midi Output

I usually load as instrument. All methods yield the same result. 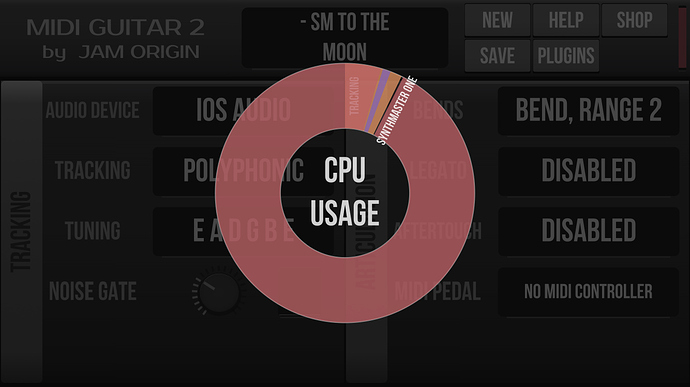 Interesting… ill try to reproduce on our devices here.
I remember running Synthmaster in MG without problems on a iPhone 6s one year ago.

Is it only that one patch PAD to the moon ARK that overloads like that?

Yes, that is the only patch acting up.

I will run smoothly for some time, perhaps days, the all of a sudden

Just did a test, and i can run four instances of Syntmaster without issues

So there must be something going on in the patch. 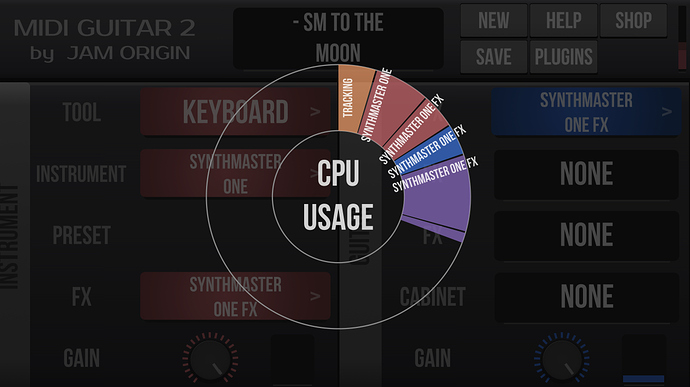 Ok, it looks like a but to submit to Synthmaster developer instead

MG just ask Synthmaster to run some samples and if Synthmaster takes too much time, then we cant really do anything about that. Im still curious and will try it out, just to be sure.