Do you match the velocity curve of MG2 to the one on your vst instruments?

Depending on the instrument used and the way it is played, the curve should be adjusted to your liking.
This is easily checked by using the MDA piano and changing the curve: you will be forced to play with more or less attack on your guiatre to bring out the dynamics of the notes played.
Increasing the curve allows you to attack less strongly to bring out the differences in sound due to the dynamics, but it is sometimes better to reduce the curve if you want to be sure of keeping a more muted sound.

Hi Paul. When you read about MIDI Velocity, page 6 in the help section (up in the right corner of the app), you’ll find this. [Skärmavbild 2021-03-02 kl. 17.31.33] I too was a bit uncertain as to what curve meant, but it would seem it can best be described as MIDI compression, and a hard curve is then “more compressed” And I did some recording in Abelton focusing on the MIDI velocity confirming this. A weak drill on the guitar while turning the Curve knob clockwise makes for a much more compr…

But that’s not what I mean though, plugins like Omnisphere also have a velocity curve setting, so I presume that the one in the screenshot would be the same as if set to 12 o’clock on MG2?

There isn’t much sense in talking about matching those velocity curves though. They really don’t have more to do with eachother than any two gain or volume settings on the respective softwares. The velocity curve gives you the opportunity to even out the dynamics part of the MIDI out from the MIDI Guitar software in general. You are well advised to find a one good setting to use for your particular setup, and then look at how this affect the instruments you play. Myself, I have the MG2 curve at twelve o’clock for almost all instruments, but the dynamics curve on my piano Is quite high, whereas the dynamics curves on my SWAM instruments are considerably less acute. But it is of course a question of personal preferences!

Thanks, one more question relating to velocity

I did some testing in Ableton where I picked different single notes with roughly the same intensity but the velocity value gets lower the higher up the neck I go even though the attack of the strings is the about the same. I’ve never played a real piano, is this how they behave in real life too? If so, is it a good idea to try and tweak the velocity settings to get the same velocity values with the same attack on every note?

For a guitar, you have way more energy in the lower end of the pitch spectrum, probably due to string gauge among other things. It is actually the same for piano in real life. But do consider that most velocity curves for virtual instruments are set for MIDI keyboards with a totally flat curve, no difference where you play. So I tend to raise sensitivity (a dynamics setting) and keep some dynamics headroom to be able to affect the output at least somewhat. The raising of the sensitivity curve, like in the picture, is what evens out some of the differences in low/high energy from the guitar. But don’t forget that this is exactly what the tone knob in the MG2 MIDI Velocity window is there for. Sculpting the dynamic output! 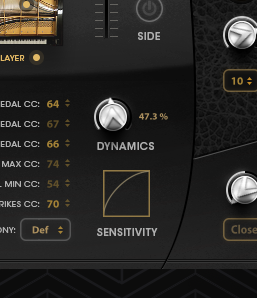 That definitely helps, thanks!