Does Presonus Studio One Artist work well with MG2?

Does Presonus Studio One Artist work well with MG2?

I need something simple for my MG2 laptop as the MG2 stand alone disables my normal audio outputs.

A tech at Tascam told me that MG2 must be taking over full control of the audio outputs so unless I can make MG2 not have exclusive control the normal audio will not work while MG2 stand alone is running.

Is it possible for MG2 to share the windows 10 audio outputs?

The problem is not with MG2 but with the Tascam 2x2 which, for all I know, does not have a multi-client asio driver, meaning it can only use one asio application at a time.

The first asio application loaded will take precedence and prevents the others from using the asio driver.

This is the reason I parted ways with my Steinberg audio interface and switched to an RME that can use multiple asio applications simultaneously, i.e.multiple MG2 standalone instances and others asio apps.

However, you will be able to use MG2 plugin in Studio One or any daw or plugin host without any problem.

I could change the interface or just add a cheap Daw. I already own Sonar Prodcucer but it’s really over kill for what I want on the laptop and I think the one I have is only 32 bit.

So I’m thinking about getting the Presonus Studio one Artist to put on the laptop since the full version of Studio one may be a bit of over kill for what I want on the laptop. It would just be nice to have something I could do some quick ideas on since Audacity will not work with MG2 running in this case because of the Tascam.
I built the laptop system for live/portable use, not as a recording station but I think having a decent Daw would be handy.
Any advice on small footprint daws that would work better than Studio One?

I have used Studio One, but also Cubase, Nuendo, and a few others - starting with Steinberg PRO-24 on Atari in 1986

I have been using Reaper for a few years now for several major reasons: It is cheap, scalable and configurable to the way you want to work, and updated for free once or twice a month.

Some people do not like it because they do not want to configure it but they want to run it without changing anything.
Personally I like to be able to change the menus, the windows and all their contents depending on whether I am working on editing, mixing, processing, etc, by saving and recalling templates.

I use a dedicated Windows laptop only for music because I use it to play live. It contains only audio applications, and it’s optimized for this unique use.
This guarantees that I will never have any bugs, crashes, latency or audio glitch problems.

As for the Tascam 2x2, it can be useful for basic audio applications, but for a more advanced use I recommend you to use an audio interface which can manage the asio in multiclient mode.

I would recommend Reaper. As far i’m concerned it’s the best and the cheapest too but what you don’t get with it is a bunch of instrument plugins. In fact you can download it for free and try it as long as you want.

I purchased the new Presonus Studio 24C interface and used the Universal Control to set the ASIO driver.
So far I only tried the Audiobox asio driver which does not work and then the STUDIO USB ASIO driver which works and seems best with the 256@44.1k (6 msec) selection for latency. It will work with the 1msec latency but has dropouts on complex instruments.

There’s several Asio driver choices in the Presonus Universal control panel. If anyone knows a better one than the STUDIO USB ASIO driver for MG2 please let me know.

So far from just a quick test with a few instruments/synths the presonus Studio 24C works much better than the tascam 2x2 usb and there’s no problem playing any media files while MG2 is up.
I have Studio one artist installed but haven’t tried it yet.
I found an article on how to set up MG2 in studio one to work properly for anyone interested:

MAKE MG2 WORK IN STUDIO ONE 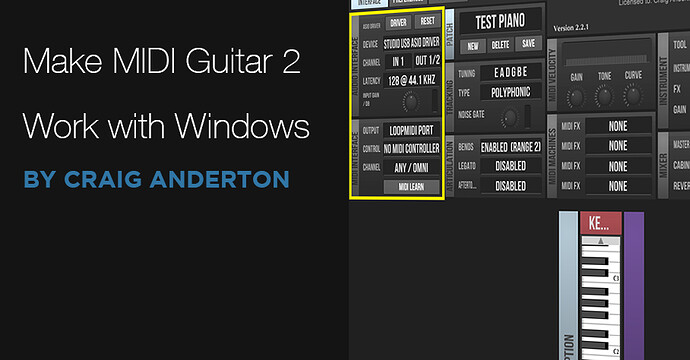 Jam Origin’s MIDI Guitar 2 (MG2) is a software-only, guitar-to-MIDI converter. It doesn’t require any special jacks, pickups, or multipin connectors—just give it your guitar’s audio output. MG2 works stand-alone, but can also insert as a...

Yes, MG2 works great with Studio One Artist, as long as you have v5. Early versions didn’t support external VSTs without purchasing a $100 add-on package. V5 eliminated that restriction, making it a fantastic freebie with certain audio interface purchases ($100 normally). I’ve been using Studio One Pro since v2. It just keeps getting better. I stopped using SONAR when Bandlab bought it and relabeled it to Cakewalk. I also quit using Reaper because I was spending too much time trying to make it look good to me (never did, and went back to SO Pro).

So, IGNORE all the other choices offered by the Universal Control installer. PITA every time UC updates (unchecking all but the Studio USB driver).

@GJNichol I advise you not only to uncheck them but also to uninstall them completely. The quality and performance of the hardware is only one part of the efficiency and reliability of the audio process. Operating system optimization is even more important to reduce latency and avoid audio glitch.

How do I uninstall the unnecessary drivers? Can I run an update and check only the correct one or do I have to completely uninstall the universal controller and reinstall it?

I do not know how the installation of presonus products works but from experience the cleanest solution is to uninstall everything and reinstall only the necessary applications,drivers and options.

There is no Universal Control app visible in the Windows APP settings page, so can’t uninstall it there. What I would try first is using File Manager to navigate to this folder:

and then delete all subfolders except “Install” and “StudioUSB”. I assume that each driver installed by UC gets its own subfolder.

Once deleted, I would reboot the machine.

If you want to uninstall UC, just run “Uninstall.exe” in the “Universal Control” folder.