I am using Cantabile as my main VST host. I manage all my Guitar sims and Effects with no issues. It allows me to easily build configurations with guitar and them switch over to midi based guitar.

For all my VST’s all the parameters switch over in the host interface as I switch to new patches. That includes ones that don’t have build in preset management.

For some reason I cannot get Midi guitar to behave in this host. As long as I have a single instance ofit in the song, the mg2 parameters are saved, but if I try to have other patch versions only the one is saved. If I scroll through the host preset/programs, the parameters don’t change, as in all my other VST.

I also tested in the latest Cakewalk by BandLab and it behaves the same.

Any suggestion on why it’s behaving this way?

Funny, I’m having the exact same problem on Cantabile too. My main question here is, do you really need to manually rename all your patches in MG (probably starting with 00) so you know which patch is which PC number? Is there a workaround for that? Better yet, is there another way to change patches? The method fo using PCs is pretty klunky, especially compared to how every other plugin I’ve ever used behaves inside my host; I simply save a plugin state in cantabile and it’s done and locked… every paramter is saved. But MG doesn’t respond to that.

I can get MG to change patches from an FCB 1010 footpedal, and the key is to send program changes, cc’s and other typical Cantabile bindings don’t work. Hmmm, need to figure out a workaround…
Thanks,
Tom

I’m not completely in the picute (dont know Cantabile);
The following more often has fooled our users:

“but if I try to have other patch versions only the one is saved” - what do you mean with “patch versions” ?
As long as your host feeds new params to the MG vst, it will work. This happens when the host changes a patch. 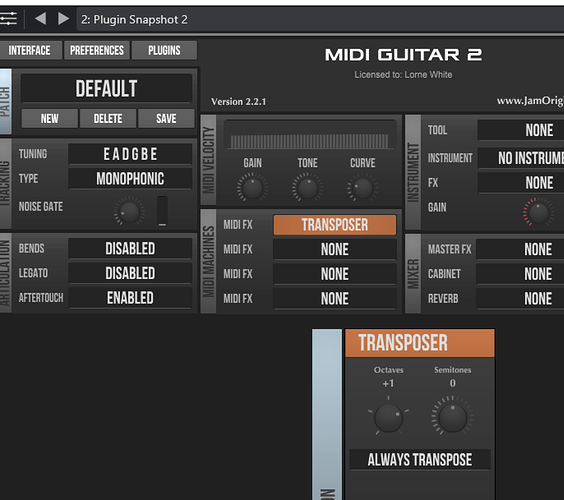 I agree that the parameters for the first preset are saved and will be displayed, but they don’t change with any other state change as the screenshot demonstrates. All my other VST’s do change even if they don’t have preset managers in them.

Hi Paul,
First, it’s very cool software and I expect it will only get better. But it’s behaving quite strangely when used as a plugin inside Cantabile, as lwhite and I described. Here are some questions…

Is a program change midi command the ONLY way to change patches?

If so, is there another method to assign numeric values to each patch name, instead of having to rename each patch manually by adding it’s corresponding PC number?

Is there someplace where you have more detailed documentation/user manuals? I’ve been through the onboard Help and your video and your DAW setup, but gigging musicicans like Lwhite and me need more detail. Specifically, how do you manage and load different banks, using midi commands? How do you change the default location of the banks (I know the default is zipbanks)? I’m having some issues with bends, I’ve read the small amount of info but nothing seems to work well, what’s the fix for that? Is there a portamento control? Where are the internal sounds stored, is MG2 a vst host and sfz player as well, etc. etc.?

Regarding future builds and the way MG2 operates, I’d first suggest that you take a look at Cantabile… it’s pretty powerful. And MG2 acts the same whether it’s Cantabile, Sonar, etc., in that we can’t call up different patches using the Host. However, every other plug or Vsti I’ve ever used allows for Cantabile to save a “snapshot” of all settings as it’s own preset inside the host, or to switch the plug’s own presets. Anyway, an important feature request for future builds would be to add Midi Learn so that Patch changes are assignable, like the other functions.

Again, very cool plugin…
Many thanks for your help,
Tom

I did find workaround from the guys at the Cantabile forum, and was able to send PCs to MG to make it work. So my first 2 problems of changing presets and potentially renaming, as I’d seen on one of the threads here, are now solved. I’d still like to see more detail on how MG functions. Thanks,
Tom

I can also get the PC to MG, but they don’t seem to switch unless the VST interface is open. When it’ closed it stays on the last patch, send a PC and no change, open the interface and it switches.