Is there any way to control 2 or more synths in MG stand alone?

I know this may be a stupid question because if one uses MG in a DAW one could obviously control more than one synth with MG.

Is there any way to control 2 or more synths using the MG stand alone?

I just though it would be interesting if there is any way to do that.

Are you talking hardware synths or software? I can’t say for sure with hardware, since I don’t have any, but software synths aren’t any problem! Just open the MG2 app, and those synths you want to play - perhaps you have to set incoming MIDI sources on your synths. You can open one synth inside of the standalone app too. Just make sure to set the bend range on your synths and MG, so that it work for everything.

I was not very clear. I meant to ask if one could somehow open more than one software synth in the standalone MG at one time. There are effects of course but I don’t see any way to open more than one synth at a time in MG.
In a DAW it would be possible but I don’t see any way to open two synths simultaneousy in the MG standalone.
Would this be a possibilty in the future if not possible now? Maybe too bulky for the standalone?

I don’t see that it would be impossible at all, even if I am in no position to actually know what the finished future MG3 will look like. But why is it important to you? Just asking from interest. What are the gains to such a setup in your opinion?

MG is first of all an audio to MIDI converter but also a mini host plugin that allows to manage effects and instruments patches in a single light and powerful software environment,

Now, to go further in the use of MG , just integrate it as a simple converter in a true host plugin in order to drive as many effects and instruments as one wishes.

There are dedicated software such as Gig Performer, Cantabile, Mainstage, VstHost, etc, whose purpose is to unify the simultaneous use of different plugins

For my live use, as shown in the screenshot above, MG is the root of all my other plugins in Gig Performer. The latter optimises the use of CPU and RAM as well as the stability of an environment that can be tricky due to the cohabitation of numerous plugins from different developers. 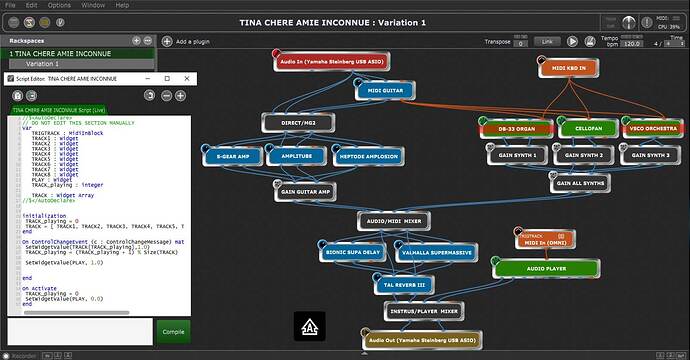 Try Unifiy.
It’s a VSTi that can host every other VSTi and effect. It can even host itself recursively.
Great piece of software.

“Say hello to a NEW WAY of working with Plug-ins of all types! Unify can work with MIDI Effects, Instruments and Audio Effects in super creative fun ways. Unify Comes in VST (technically known as VST2), VST3 and Standalone for PC and Mac (Mac version also includes an Audio Unit version of Unify).
One of the cool things with Unify is that any format of plug-in can load other formats of plug-ins – meaning the Audio Unit version can easily load VST3 and VST plug-ins while you’re using it in Logic Pro X (which doesn’t know what to do with VST or VST3 plug-ins).
We talked to a number of small (like us) developers who have made some rather amazing free plug-ins in the last 20 years and received their blessing to include their plug-ins and audio effects – along with our own Guru Sample Player and 14 Effects we built ourselves so that Unify ships with 400 ready-to-play patches when you install it. BEFORE you even start loading your own plug-ins! That puts Unify in a totally different class than any other multi-plugin: we include 6 Instrument and 40 effect plug-ins that John “Skippy” Lehmkuhl used to make the 400 patches that come with Unify. From simple to complex and everything in-between PLUS Laurent “AIRWAVE” Veronnez was able to add 30 additional Patches that push the limit on what Unify can do even farther than Skippy did. It’s breathtaking what has been created here. I spent 1+ year making this with Shane Dunne (the programmer of all the code in Unify) and I am still in awe at what we have created.”

I just wanted to combine some different instruments such as an organ and a sax or strings and organ for some simple examples for big pad sounds with different attack/decay rates. Maybe even a split keyboard type of preset with a flute and oboe so there are different instruments depending on what note ranges are being played.
Just wanted to try some different combos.
I think I have some synths that can combine but they likely split up use of oscillators and lose some sound depth.

Yes in my experience, out of my midi out from my Alesis iodock ll to my Roland Juno G.

You mean that you can control a couple (2 or more) of hardware synths with your Stand alone MG2 via your Alesis iO dock? Great, I would have assumed it works, but I don’t want to verify stuff on assumptions.

I suggest to use Camelot Pro from Audiomodeling.
Just open MG2 standalone and you will see its virtual midi output in camelot where you can drive anything you want (hardware , software etc…) , split based on note range, velocity and so on. It is also a setlist/song manager for all your live needs.
It is available on pc mac and ipad.
Very soon you will be able to load mg2 inside camelot to have a full unified experience.