Hi all, I’m about to purchase MIDI Guitar 2 after a few days of trying it, but before I do, I want to address what is to me a pretty huge problem, and request the devs fix it fast.

I own a 3/4 length (short scale) electric guitar that I bought specifically to use with MIDI Guitar 2 because I saw that it recognized up to F# Standard tuning (2 semitones higher than E Standard tuning)—so now I’ve bought my guitar to use with the program, tuned in F# standard, and I loaded up a professional orchestral flutes VST to test out how well this program will trigger things like flutes and other very high-pitched stuff.

But the program is not recognizing the 21st, 22nd, 23rd, or 24th frets of my guitar’s high F# string. Check the MIDI monitor in the screen shot. You’ll see it triggering on the 17th, 18th, 19th, and 20th frets of that same string just fine, but as I plucked the next 4, nothing.

I completely understand if you cut the software off from recognizing pitches at certain high and low points, but since your trial shows that it supports “F# Standard Tuning”, and someone like me would own a 24-fret guitar (2 octaves) and then try to use the software in that tuning, do you really intend to have 2 or 3 of our frets not working, and if so, why?

I’m thinking maybe it was just some oversight. To be quite frank, considering the point of MIDI guitar 2 for most people is to trigger VSTs, and things like Flutes, Piccolos, Recorders, Glockenspiels, Chimes, Bells, etc. exist, I would imagine the developers of this software would have baked in its ability to trigger much-much higher notes than it currently recognizes. 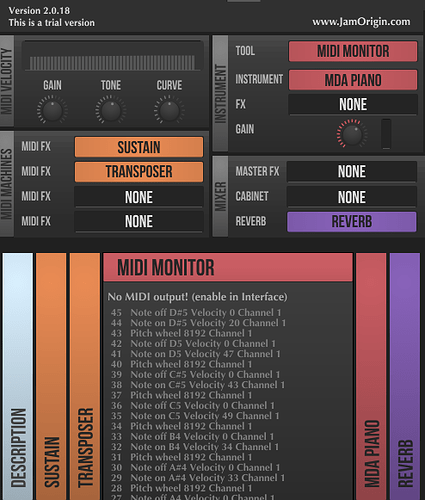 On the low-end, I understand, since that’s what Midi Bass is for (and because tracking low frequencies is much messier and harder to control) but those super-high notes that other instruments can hit regularly, should be able to be reached for those with, say, 27-fret guitars or, in my case, short-scale guitars which are in F# standard tuning.

Does anyone know if there will soon be higher notes available in MIDI Guitar 2? I honestly might hold back from buying until then… I haven’t yet seen how responsive or proactive these developers are, yet, so… kind of iffy on it.

Most people playing higher midi instruments, just transpose the midi. Guitars generally are not so comfortable for playing up there, especially chordwise.
That said: we’ll try to add some range at the bottom and the top in the future.

I second this as well, the midi guitar works on other instruments as well as the human voice. To open up the range of the software would make it even more of a genius software. Can you imagine using any instrument regardless of range with the software? I used my voice,piano and it worked perfectly, i just wish 8 octaves were supported. First of its kind.

Yeah! I recently sold an extended-range guitar (a 10 string, don’t laugh lol) which would play notes as low as A#0 (I think it was) “cleanly”—so when buying a new guitar to use specifically for MIDI Guitar and/or Bass, I was originally hoping to use a low, fat-sounding “guitar” called the SRC6—a baritone guitar with bass strings and therefore in “octave-below-E-Standard” tuning.

But of course, MIDI signal processing that low is hard to keep clean, I’d imagine, and MIDI Bass is only Monophonic in its handling of the signal, at least for now. And MIDI guitar can’t process any notes below Drop D on a 6-string guitar, so I thought to myself—why have a guitar in the 10-string, 9-string, 8-string, 7-string or even baritone 6-string guitar range if I can’t trigger any of the notes below a tiny little “normal 6-string”

So my solution? I bought a 3/4 scale Ibanez Gio Mikro for $150 so I can tune it to F# Standard (the highest the software will currently allow) which will allow me to get better usage out of my high-pitched VST libraries like flutes, recorders, and many others I own. Now, it’s just a matter of being patient until the devs recognize that there are guitars which quite a bit higher than the range MG2 currently recognizes (like, a 27-fret, 6-string guitar tuned to F# standard would be almost a full octave what the program currently registers) and ALSO that guitars — and not even basses — can also go much, MUCH lower than it currently allows.

The latter is less of an issue, since MIDI Bass is there to back it up. But since MIDI Bass will someday be a separate product, and an almost majority of guitar owners by now play on guitars which have notes far, far below “Drop D” pitches, there’s going to be a lot of issues with push-back against Jam Origin if they don’t find a way to allow for broader range in MG2, or at least quickly develop polyphony into MIDI Bass so, say, an 8-string guitar owner could at least chain MG2 + MB in the signal chain to “fake it”, but obviously even that would be a big pain of a workaround considering how someone would have to buy both MG2 and MB to do that. Right now, it’s totally an issue since everything is still under development, but I’m just helping to provide feedback for the developers about issues I can almost guarantee they’ll run into as MG2 catches on to more customers and MIDI Bass “goes independent” soon with its own price and lack of polyphony.

Man i have done the same exact thing, i purchased both midi guitar and midi bass to use my 8 string on. And i also purchased a 10 string so i could use the midi bass on as well, but to my surprise it didnt track lower then the standard bass guitar range. Your not alone im glad there is someone else out there too like me, cant wait until they perfect this software, it would take this world by storm. The midi bass and guitar combo works, you just have to use a script to limit what the higher notes the midi bass picks up, cause you want to use chords that use high and low notes but midi bass is only mono so a script is needed. Paul sent me a script that worked perfectly, to limit midi bass so that it only tracks the bass range you want, Thanks again paul for that too btw haha. Greatest software in the world it can only get better