MIDI Guitar Not Working with Spitfire Products (Mac Intel I9)

I just installed MIDI Guitar and it works great with all my VSTs/AUs except Spitfire Audio products. I just get a spinny wheel and Logic freezes whenever I try to load a Spitfire instrument.

The bulk of my plugins are Spitfire unfortunately. Has anyone else noticed this behavior or have a fix for it?

I’m running Logic Pro X on a Macbook Pro with an Intel I9 chip and OSX 11.6. Thank you!

Hi @farwesterner1
I have some Spitfire Audio products as well, and I could perhaps try and see what problems we might have here? Are you talking about MIDI Guitar in standalone mode or as a plugin in Logic ?And what plugins are you having trouble with specifically?BBC orchestra? Labs? Please name them, so I can get as clear a picture as possible.

Thanks! I’m running it as a plugin within Logic Pro X.

One small thought is that all the Spitfire plugins I own use their own UI. I don’t own any that run through Kontakt. But I don’t know if that could be part of the issue.

I know I had an issue with those particular ones myself as I was moving over to my M1 Mac. It would seem I had to download them all over depending on whether I used Rosetta or not, so it is definitely something “special” about those. I just downloaded BBC Orchestra for my MBP (2,4 Ghz Quad core i5) running Monterey 12.0.1. I tried opening MG2 as a plugin on a AUDIO track and BBC on a SOFTWARE track, but didn’t get any spinning action or freezing. If you go into your SF downloader, do these produce look as normal installed products? No red triangle exclamation?

Funny thing, I just downloaded and installed BBC on my MBP, and it still shows me that red exclamation sign. This is what I am talking about: 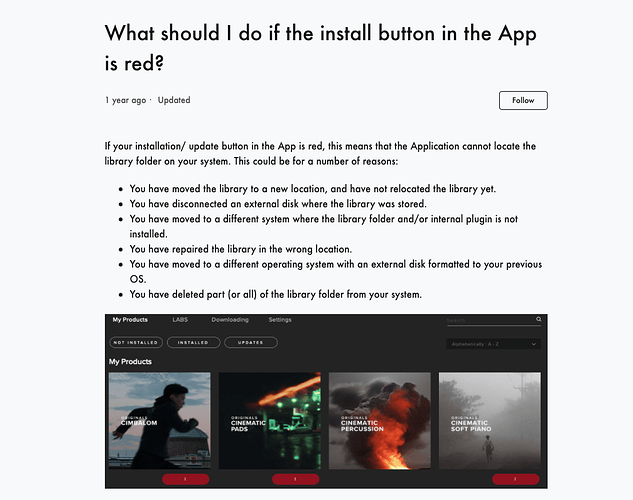 What should I do if the install button in the App is red?

If your installation/ update button in the App is red, this means that the Application cannot locate the library folder on your system. This could be for a number of reasons:  You have moved the l...

They work normally if I just use them direct as plugins within Logic (without running them through MIDI Guitar).

It’s when I try to load them into the “Instrument” channel in MIDI Guitar that they freeze Logic. And I only have that issue with Spitfire. Not with Native Instruments or Orchestral Tools or anything else.

Ok, but why open them in MG2 in Logic to begin with? Why not on a separate software track, if I may ask?

Did you check your Mac’s system security settings? If I try to open Fragile String Evos via MG2 I get a security alert. If I use the “open anyway” option, I can suddenly use this plugin in MG2 as well.

Don’t I have run an instrument through MIDI Guitar 2 if I want to use it (+my guitar) as the controller of that instrument? 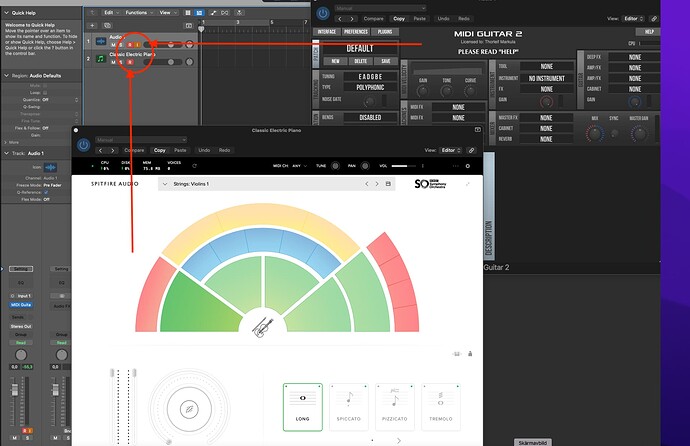