Struggling with MIDI Guitar for GarageBand

Running GarageBand latest update on Big Sur. Bought MIDI Guitar for GarageBand and it does not access GarageBand software instruments, nor can I record from it as MIDI. The screen is black in the lower half, unlike all the videos/adverts, etc.

Is there a dumb noob step I am missing?

Not sure what steps you have taken but the following are needed, and worked in my case. Also using Big Sur. In my case I am plugging an electric guitar into an Apogee Jam input, (others such as iRig etc work) which allows me to get the guitar jack audio in to the iMac. Not sure what your audio setup is but see steps and hope that it solves your situation.

In Garageband no special setup is needed. select a software instrument track.

You can also Go under Garageband Preferences > Audio/Midi and click Reset Midi Drivers.

Does the level metering for the Software Instrument Track light show a signal? If it does then you may just not be able to hear it and you need to check Sound output settings in Garageband Preferences.

Queb, thank you for taking the time to reply. I tried everything you suggest, but EXTERNAL MIDI OUT does not show up as an option. The second suggestion demonstrated that the MIDI Guitar app is not being detected by GarageBand.

I have checked the Privacy setting>microphone and MIDI Guitar is enabled there.

See the following images and let me know what you actually see in the list as shown. Are items or instruments actually missing from this list? The images are sequential… click images to see them larger 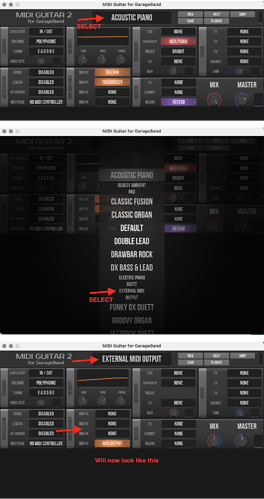 My App shows the following settings which happen automatically when app is open, and interface is plugged in.

What are you using for a guitar input?

Does the Guitar Midi App work on its own with the built in Midi sounds and you just can’t get it to trigger the Garageband App?

Clicking on AUDIO DEVICE shows the following for me. 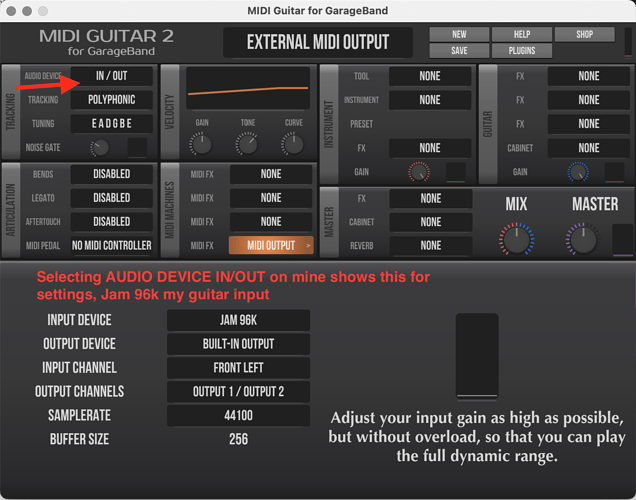 I see your bottom half screen looks black indeed! Something is wrong on our side. You should see various modules and settings on the bottom half.

Please me me know which Mac you use and if you use an external monitor.

Guys, I’ve been replying to your emails, so my responses will not show up here.

Here is a summary:
Interface is a Focusrite Scarlett 212;

MIDI Guitar app works on its own, but not in GarageBand;

since reopening MIDI Guitar today, more instruments have appeared, including some of my sample plugins;

I have been able to get the exact same screens as you show;

but when I open a software (MIDI) instrument and play my guitar, all I hear is my guitar!

I can get the sounds out of the MIDI Guitar app, but haven’t a clue how to record them as audio in GarageBand.

Resorting to the old trick of switching off and switching on again, it is now working after a fashion. A lot of strange random notes get triggered from the GarageBand instruments and I still don’t know how to record the voices in MIDI Guitar.
But, progress has been made!

It should be very straightforward forward to record notes in GB - ie. press the record button. If MG just run in the background and set to the “External MIDI Output” patch, it will feed feed the midi notes to GB.

OK, but I want to use the sounds in MIDI Guitar, not the GarageBand instruments.

Look, I followed all the tips - I’m using a MIA Fender Telecaster, bridge p/up, tone and volume all the way up, picking as cleanly as I can, palm-muting and still the tracking is awful.
Too many random notes to edit out, the app sometimes doesn’t distinguish between octaves (defaults to the lowest,) and quite a few notes randomly don’t register.

Also the MIDI Guitar instruments are way nicer than the GarageBand ones. I want to record those sounds.

Sorry to be moaning all the time, but I really want this too work for me. If not, I’m getting a refund from Apple.

Oh. It sounds like something is wrong. MG very rarely makes octave errors and the tracking should be the same regardless of whether you play the internal sounds vs GB instruments. But I’m afraid I don’t know what to suggest.

You wrote in the first post that your bottom half of the screen is black - is that still the case? If yes, something is wrong for sure.

The bottom is only black if you select the External Midi Output. If the TOOL is a keyboard a keyboard fills the bottom black area area. If the Audio Device is clicked then it has settings filling it like in the last image I posted. . The space is black only when there is not something filling it in other contexts. Seems normal to me,

Example: Black is filled by keyboard. 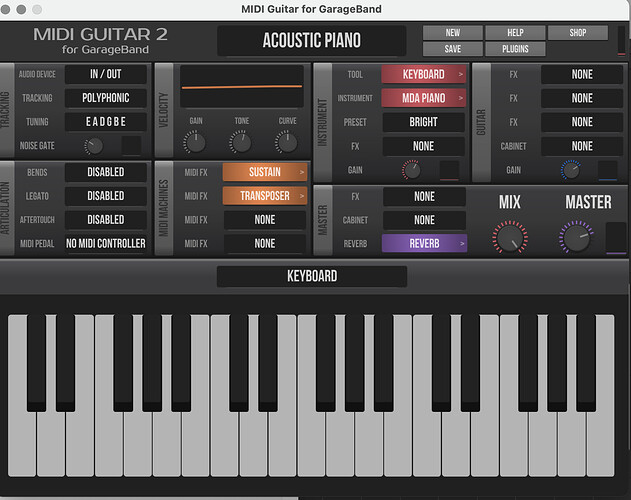 Sorry for not responding sooner. I stopped getting emails saying that there were new posts to the forum. I now have to check manually.

THE MODERATORS: Pleas give your input as I would like to know this as well…
I have searched and found no way to get the Guitar Midi App to send the app audio directly to an audio track in Garageband. This would need to be done in the Midi App, and Garageband views System Sounds as the Audio interface (Scarlett etc) not the MIDI Guitar app. The DAW Audio Unit Plugin version will most definitely be able to use the sounds by the MIDI app as it is a plugin within Garageband itself and so not viewed as an external app at all. Of course that is more money. And you aren’t satisfied with things yet so not a solution.

There is definitely a way to do this on iOS (Inter App Audio) but I can’t find a way on Mac OS.

I think there is a solution for you and this software does work. I suspect it is more of a sound level issue.

I can say that I have owned a German made Terratec Axon AX100 Midi converter for guitar and have the Roland Midi guitar pickup. It was the fastest dedicated conversion equipment you could buy at the time. It cost over $1500 complete in Canada. I just put it in a box after trying this app and am very satisfied. It does things better and easier than all that gear.

I know with the MIDI Guitar software a big part is the signal strength balance. Not the volume on your guitar but the Gain on your input device, Make sure it is Just short of bouncing into the Red.Try it that way and hen lower it gradually to test responsiveness. Also try high Gain and lowering the volume on your guitar. I find it works best for me at a lower guitar volume as my pickup is high output. (so a cleaner guitar output and a louder signal from the Scarlett)

Like my old AXON and this new app… the app is listening for sound. if the signal is too quiet, it skips motes, if it is too loud it takes harmonics and resonance as notes. If it is to distorted or saturated it can’t differentiate and falsely interprets things.

wishing you the best with this.

JamO have been absolutely brilliant on this. I am just awaiting a reply about getting the new licence recognised. Thank you for putting this video on. I followed all the steps: new project; one audio and one instrument track; disabled the plugins on the audio track and opened MIDI Guitar plugin instead (still no Export MIDI option); enabled Record on both tracks; hit Record, and laid down some audio.

The audio track played back with whatever software instrument I had selected, but nothing appeared on the instrument track. I opened the Piano Roll screen and noticed that as the audio played, the individual keys on the keyboard were being triggered - black dots. No MIDI data appeared on the actual track.

I’m running GarageBand 10.4.3 on Big Sur, so maybe some things have changed since your video.

It seems the answer, in my case, is to set up the two tracks, as above, record the audio, then arm the instrument track, hit Record and the audio track then plays and records as MIDI on the other track.