Hi all, new user here and scratching my head on this one.

I have set up midi guitar 2 on my Studio One Pro DAW with one audio (with midi guitar 2 plugin) and one instrument track with input from MG2.

The issue I have is that even with the very lowest process block size available to me (using an empty track) I’m getting about 30ms of difference between the transient on the audio track and the recorded midi on the instrument track. MG2 is reporting 1.3ms of latency so I don’t understand why I am getting the extra.

If I put an instrument into the MG2 plugin then it sounds fine but I want to use it to trigger my VST in studio one so that doesn’t really help.

I have tried playing with recording offset, midi offset, block size and dropout protection but I can’t get below about 30ms of latency.

Please help. This is a great bit of software…it’s just that I don’t seem to be able to use it. 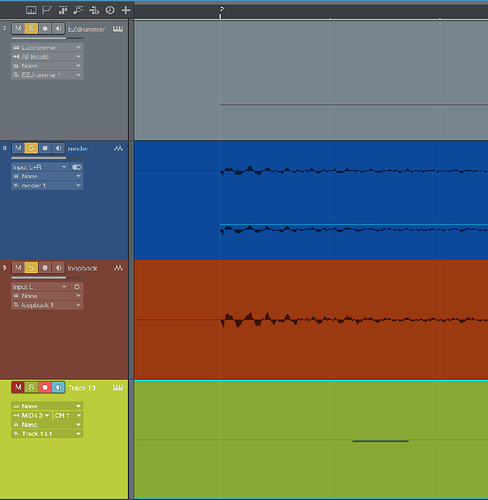 I’m just replying to my own post to illustrate my problem with a snare hit on bar 2.

First track (grey) is EZ Drummer with a midi hit right on the start of bar 2).

Second track (blue) is a stereo render of that snare hit

As you can see, all those are dead aligned.

Fourth track (kind of greeny yellow) is a recording of the midi coming out of MG2 put on one of the audio tracks. And that’s 38ms later.

@JamO since nobody has replied I’ve been searching back through this forum and you’ve said in a previous post that the midi tracking adds about 30ms. So is that just part and parcel of MG2 and can’t be removed? Does that explain what I’m finding above?

Yes, what you see is in the ballpark, although it seems a bit long in the tooth.
All midi solutions have some inherent latency to track pitches.

One thing to try: run the MG standalone instead - does the feel better?

The type of guitar and the noise gate has the biggest impact on latency.

@JamO, thanks for the reply. I’ve just done the test again using a midi generated guitar rather than a snare and it’s down to about 20ms so maybe MG2 finds the snare I used for the above test trickier than a guitar.

I also did the test using an instrument in the MG2 plugin rather than sending it to a separate midi track but this gave the same result. About a 20ms delay.

I still don’t quite understand why the plugin is reporting 5ms in the interface tab. I guess that is referring to something else but that must be irrelevant if, in the real world, the midi messages are being generated ~20ms after the transient of the guitar note. That’s the latency that is meaninful and, unfortunately, 20ms is just enough to be heard.

I’m going to have to figure out how to use this so it works in a studio setting. I can see how 20ms probably disappears in a live performance but for studio work that’s too much just to live with.

Hi, I use studio one 5.2 pro also and I seem to have pretty good luck with the standalone and using LOOPMidi from there and the input active in External devices in Studio one.

Thanks @tomh, I actually didn’t know about loopmidi and it looks like a really useful tool. However, it’s not going to get rid of the midi tracking latency as that’s obviously baked in to the software. I’m kind of surprised there aren’t more posts (and support pages) about how to deal with it. As a studio one user I’m probably going to use a negative track delay setting on the midi instrument track as that will get it back in line. I think that’s going to work but I’m really surprised there isn’t a page for each DAW explaining how to get rid of the delay.

Its indeed possible to offset the note timing (say -20 ms) directly from a plugin with some DAWs, but (at least a few years ago when we implemented MG v2) we saw some DAWs would somehow result in increased latency when doing this, I guess because MG was operating “non-real-time”, and in those cases impossible for users to understand. So, we went with simply making it as real-time as possible.

In the future there will be a dual tracking system - one live tracker (for playing/monitoring) and one deferred tracker (which has more time for listening before outputting notes, and can output them with correct timestamps, for recording). Best of both worlds.

@JamO thanks for the reply. That’s certainly something that would be an interesting addition but, in the meantime, there’s quite an easy workaround in studio one which is to record the guitar, delay that audio track by ~20ms and then record the midi instrument from the MG2 input. That’s better than my first idea (to delay the midi track) as you end up with the midi in the right place on the grid.

I don’t know about other DAWs but I suspect there’s something similar.

As a suggestion, I would definitely put this workaround up on your website along with an explanation of the real time latency that people can expect in studio situations. Otherwise every single new user is going to have to work out what I just did and, I suspect, a lot of people will demo the product and not bother to buy it because they haven’t go the time or patience to work it out.

Totally up to you but my guess is that you’ll have a lot more happy customers if you do it.

Thank you for suggestions. We’ll try to add a remark in future tutorial videos.

What you describe is already in MG - check the sync knob. Of course this works only if you record the audio from MG in the daw.

Studio one cannot simply add a negative delay to all midi notes in a track? I’d assume almost all the major DAWs could do this and even customize “shift all notes in track -20ms” as a simple command.

But ok, we’ll make it as easy as possible in the future.

@JamO sorry, perhaps I haven’t made myself clear.

Yes, you could alternatively shift all the midi notes by -20ms but the way I’ve described above is much easier because you only have to change one setting (the -20ms delay in the audio track) which I think is far easier than selecting all the midi notes and moving them back 20ms.

Either way, I think you’d do yourself a favour if you added this to the tutorials because, as a new user myself, this stuff isn’t covered anywhere. There’s a lot of guitarists who’d really appreciate MG2 for studio work (rather than live performances) and this stuff matters.

Yes, I understand. Thank you for the heads up and clear explanation.