Sustain is permanently on, can’t see why

Hi, I just got MG2 iOS and am loving it, thanks so much for everyone who’s worked on it!

Anyway, all was going so well BUT now it’s like I have a sustain pedal connected which is permanently pressed.

Hi Mike!
Are you using MG2 in standalone mode? Do you have the sustain function loaded in a MIDI FX slot? If so have you tried clicking on it (the pedal)? It isn’t the most sensitive thing I’ve come across in terms of using it with a mouse on the desktop version, but in iOS it shouldn’t be an issue, so click on it till you see it change position. Another thing could of course be it you have anything connected to MG2 feeding it CC64, like an external sustain/expression pedal? Tell us a little more about how you are using it, and I am sure we can sort this out!

Many thanks for you quick response and tips.

Although I have been using MG2 iOS in conjunction with Korg Module and SampleTank , on my iPad, I have deleted them just to check they are not causing the permanent sustain issue in some way.

I don’t have any external midi controllers of any sort, I simply input audio via iRig 2.

Also, I deleted the Sustain and Transpose MIDI Machines that load automatically when the app is downloaded.

I did reload the Sustain to experiment with this issue but it made no difference.

I’ve restarted my iPad, restarted the App and also deleted and re-downloaded the App BUT still no joy.

I am currently testing by simply tapping the App Keyboard and listening on iPad earbuds - not even inputting guitar audio.

Also, another strange feature is that the Keyboard (using the onboard MDA PIANO) is only playing monophonic, but even though tracking is set to Polyphonic.

And the pressed key stays illuminated even after I take my finger off.

Again, any ideas would be very welcome.

Ok! If you open MIDI output in the MIDI FX slot, what does it look like? Try and have the sustain pedal loaded to and click on it. Looking for those 0/127 values at the bottom of the pic to begin with. 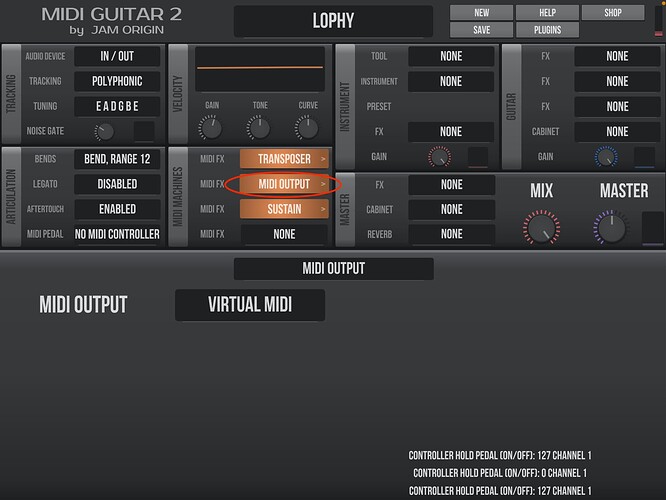 Thank you. Toggling the sustain pedal on and off shows up ok in the MIDI Output list.

I then went back to playing in the MIDI data using my guitar and it all worked perfectly.

If I play a note on the in-app keyboard it always sustains BUT if I play it on the guitar it doesn’t. (This is all with and without a Sustain MidiFX loaded).

NOTE: If I play a note on the keyboard it sustains BUT (during that sustain - ie. key lit up) if I play the same note in on the guitar the sustain is cancelled.

This only happens if I play in the SAME note on the guitar. I can play any OTHER notes BUT the sustained note is unaffected, ie. it remains sustained/lit up.

In practice, ie. when playing live, this isn’t a problem, just annoying when using the in-app keyboard, eg. For auditioning new sounds etc.

Ok, so it is a “KEYBOARD” issue then? I haven’t used it until now and it seems to behave in the same way for me. Monophonic and sustained (to a certain degree - not superconsistent behavior).

Many thanks, it’s so new to me, I assumed I was doing something wrong. To be honest it’s probably best I stick to using the guitar for input; that way I’ll get more practice with this new playing style.

Thanks again for your help with this!

No problem! This is what this forum is all about! We have questions, and we help each other to the best of our abilities! I would absolutely stick to using your guitar for input since this is what the app is for really! Best of luck with your further exploring, Mike!