Is anyone else having issues with MG2 freezing? As shown in the image the CPU indicator goes high and it locks up. The white area at the bottom of the image was showing the D1 screen before freezing, I primarily play with AUv3 synths like Kauldron, Pure Synth, D1 and Syntronik. I thought originally that it happened when first loading a patch with a new synth, but it’s been happening while playing. 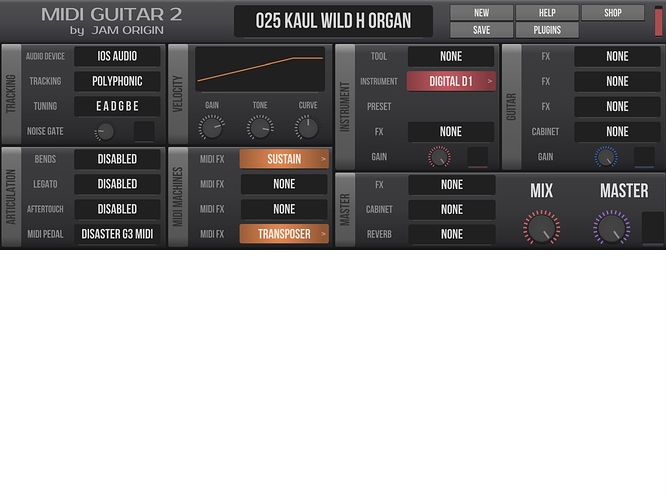 Symptoms: Every Xth time you load a AU synth, the CPU load will go wild.
With synths that we could get wild this way, we also tested them in other hosts like AUM, and they behaved the same…
As soon as you load the patch, and you see the CPU spike, you should try a reload of the patch.
If the CPU then is quiet again, then you now we’re talking about the same AU issue.

on top of that: Digital D1 has its own problems. I could’t get it working as an AU plugin on my ipad sofar (it crashed continously), but I might have missed the latest update now.

This is happening after load while playing along and all of a sudden - freeze. It’s happened at least with the 4 mentioned synths. So is using AUv3 synths just not stable enough for prime time? I’ve also loaded synths in AUM and used midi out of MG2, but loading AU synths in MG2 is much more convenient during performance since I can save the state in the MG2 patch.

As shown, I am using a midi pedal(Midi Baby via USB) for sustain as well, if that matters.

the midi pedal shouldnt matter.
AUv3 is a still young technique: there still are quirks. It will no doubt grow, and make IAA superfluous. But there is still work to be done, we basically have no grip on why things might bug now. We thinkg that the instability is not caused by our side of the programming.
Apropos: Ipad Pro first generation:
-what kind of CPU does that have?
-have you closed all other apps while playing?

A9X chip with M9 motion co-processor and yes all other apps were killed. Since I’m new to MG2 and I’m learning and vetting this to use for live performance(replacing Fishman Triple Play), it was not in airplane mode however. It was also during about 3 one hour sessions where I was auditioning many synth sounds to determine which sounds to use. Each time it froze, I had to kill MG2 and reload to continue.

Also, the CPU graph is usually about 25-30% during normal use.

it might be the problem I described first: to be sure of this, and help us find a cure, you should try to reload the patch as soon as you see the CPU goes wild. Then we know it is the same bug.

Update:
-Over the last week or so I had used it multiple times for 15-20 minutes each with no freezes.
-This morning - running through songs for this week - about an hour total & MG2 as the only app running, using 5 different Kauldron presets in MG2(Auv3)

So - I’m pretty sure in the past that when it was spiking, I could have reloaded the preset, not killed and restarted the app. It does seem that when it is spiking repeatedly, closing the app and restarting may provide some better level of stability after restart.

Another question - I’ve also had the midi pedal “disappear” and I have to reselect it occasionally. I haven’t determined the scenario. Is that and the audio input information saved or is it sensed occasionally or on startup?

Quick update - since the last update, I’ve had a few instances of it spiking and cutting out as soon as I step on my midi sustain pedal. There definitely seems like that is a factor sometimes.

I was able to go through rehearsal without any glitches on Wednesday. Wish me luck for Sunday!

I’ve not had MG freezing, but I have an issue with Syntronik disappearing after 10 to 15 minutes of use. MG continues to work: I can hear the clean guitar signal. But there is no Syntronik sound and when I open the plugin window, I see a blank white screen with ‘Syntronik’ written at the top. Any ideas what may be happening?

(syntronik: that is not ios I guess. it is iOS category here.)
But nonetheless: how are you running MG? as standalone? please give more details about your setup.

I’ve contacted IK media about it too. Quite likely a Syntronik AUv3 problem, but since it was mentioned in this thread, I just wanted to check if anyone had experience with it.

Hi ron0ryan1,
I googled your suggestion but couldn’t find any leads. Could you be a bit more specific. I don’t know how to adjust drivers at all on my iphone.

there are no real driver settings on iOS.
Young AUv3 plugins are likely to be more buggy: please check for updates for Syntronik.

I am having exactly the same issues, similar setup, same synths

The instability with AUv3’s is at iOS system level as far as we know.
The last time we checked, the number of reloads of a certain synth that would crash it, was the same in both MIDI Guitar and AUM.
This ios issue has however improved dramatically with
the latest iOS/IpadOS 13 updates: the number of reloads before crashing has increased considerably.
It might be linked to the increased memory limit for AUv3 with the latest updates.

Paul - Thanks for that updated info!

one sure way to get a freeze, even with a less demanding vi (in this case synclavier go or Synthmasterone) is to use the sustain- hold synth, switch to guitar.

In addition, the midi pedal assignment on articulation is not saving in the patch on reboot

“Hold synth, switch to guitar” freezes the current notes in the synth channel.
That is not the kind of freezing that is meant here in this thread, we’re talking about a non-responsive app.
I could not find an error in that function.

The pedal midi input choice is global (not in patch), it still doesn’t store wit hthe global settings, that is allready on our list. For now you need to set the pedal every time you start MG.