In their February 03, 2020 blog Gig Performer makes the following statement:concerning using computer versus discrete hardware as a performance tool: “Crashing – Well, I’ve been using a computer-based setup for more than 3 years – not a single crash on stage or rehearsal for that matter. Any hardware can crash, but a stage-optimized computer will typically crash only if its hardware fails. Hardware in any pedal can fail exactly the same way a computer can fail.”

Okay, I don’t doubt the validity of the statement but what is a “stage-optimized computer”? The blog doesn’t say. (soapbox pet peeve don’t write a blog article and use a self made term without providing YOUR definition so you and the reader are on the same page) and an internet search didn’t bring up any useful articles or definitions.

I have an idea in my mind what the writer means and I bet you have an idea too. However do your idea, my idea and the writer’s idea agree or disagree? Who knows.

imho it is more a “stage optimized computer human situation”.

Only a dedicated stage computer can provide all of above points: personnally I’m a betatester, and use new stuff, even on stage. This provides others with info about whether it works ( that is the communtiy info mentioned above).
So there is also a personal component to this: the amount of accepted tweaking on stage differs per person. If you feel very distracted fumbling with computers on stage, you have to prepare by making your computer very reliable and transparent: you’ll allways want to know exactly what to do.

Paul has well defined the proper use of a computer on stage.

More details in this topic, applicable to all softwares and computers: gig performer

In rehearsals and on stage, disabling antivirus, firewall, networking, notifications is safer.

Everything in the previous responses makes sense to me. If you are wondering if anybody actually makes what would be considered a stage optimized computer,one built specifically for live use, it would be the Seelake Audiostation X64. Check it out at Seelake.com. I own 2 of them and use one live to mix the entire band and process everything using plugins. They are expensive but solid. I’m planning to sell one, if anyone finds them interesting. (At much less than the price on their site). Love Midi guitar 2 , by the way for my guitar and my bass player. Its one reason that from now on my guitar rig will be a computer with amp sims and midi guitar 2, so im personally always planning on using computers live. It doesnt worry me anymore than my old marshall head did when a power tube or a grid resistor would start to fail and the sound would fade in and out.Then i would have to worry every time i went on stage about it. Every band on tour now is relying on a series of computers to host plugins and such at front of house, every night.

I have a friend that always uses a laptop during his stage performance. As a one man band in addition to his guitar rig the laptop displays song lyrics, plays backing tracks and runs a playlist.

He always runs two identical laptops concurrently so if something happens to the primary he can switch to his backup at any time. The laptops have the batteries disabled and removed from the laptop so the laptop runs off the power supply all the time. He uses a five button USB footswitch for remote control of the laptop.

To the best of my knowledge neither laptop has ever touched the internet. He updates two or three times a year by applying pretested images he creates at home. While extreme, he’s only had one failure (hard drive) in more than 15 years. Because of the spare the audience never knew the laptop went down.

Thank you for providing the Gig Performer link. Your link provided the context I was looking for. It provides the background information I hoped was available. If anyone reading this hasn’t followed my link and Harold’s link yet the two links will help you better understand why I started this topic.

Harold, I see your method as a good method for people that use one computer for both personal use and stage use. Boot up for personal use at home or while traveling and boot up in stage ready mode as needed. Pretty nice.

Welcome to the forum! Thanks for sharing the link to Seelake AudioStations. I was not aware of their products. I would definitely trust their products onstage! I’ve shared the link with my friend I mentioned above.

No problem! If he winds up interested in their stuff, have him get in touch with me first. . I’m going to list an Audiostation X64 that they sell for $2600, for $1800. Plus mine have memory upgraded from 8gb to 32gb.

Hi,
I use som older mobile computer (which I wouldn’t recommend here, because it is only 2nd hand) togehter with Steinberg UR22MK2.
First the performance was ok. But then, after some power saving and after running it for several days, I had real performance issues (I had to increase the number of samples at least by a factor of 4).
Then I enabled the so called high performance mode, sometimes also called ultimate performance mode.
That was the solution.
See here for more info: 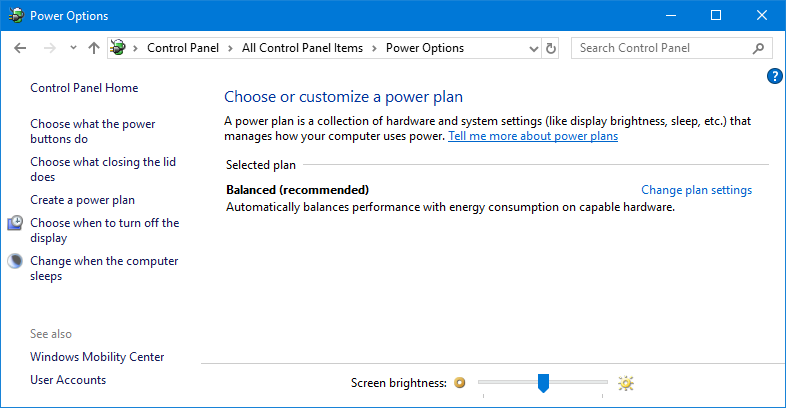 In a few clicks: add a missing High Performance plan to Power Options in Windows 10 Pro and Home and tune it to your taste. Make your PC perform better!

How to Enable the Ultimate Performance Power Plan in Windows 10

Microsoft has added an “Ultimate Performance” power scheme to Windows 10 April 2018 Update. It’s built upon the High-Performance power scheme but tries to eke out every little bit of performance possible. Here’s how to enable it.

I’ve been using computers on stage for ten years now with several types of software including amp simulation and soft synths with high demanding of resources, MG since its first release without a single crash. A dedicated and optimized computer is a MUST. Nowadays CPU’s are so powerfull they can handle almost everything.

@ron0ryan1, So do you use an Apple Macintosh, Linux, Chromebook or something less mainstream?

I recently upgraded my laptop from Windows 7 Home Edition to Windows 10 Home Edition and have been pleased with the update so far.

@Ariajazz, do you remember the specifications for your computer and operating system ten years ago? Do you still use the same amp simulations and soft synths? How many hardware, operating systems and software updates do you guess you’ve made over the decade?

Selecting high performance mode or turning off all the power saving options seem to be a necessity for laptops. I would think nothing like having the display darken or the computer go into sleep mode to really mess up your mind on stage.

W10 More reliable than any other version. You just have to optimize it and disable whatever bothers a smooth performance of OS, cortana, updates, notifications, wifi, etc. There are tons of tutorials on how to to do it on the internet.

AMD Athon IIx2 270 Regor (3.4GHz) 4 Giga RAM. I’ve tried and use almost all amp sims in the market but now I stay with Scuffham S-Gear and Ignite amps wich are the ones that have the best sound and realistic feel. Soft Synths… I’ve used a few. I started using computers live with Window 7, now i use W10. As time goes by you always feel the need to update and upgrade things. After all these years I’ve learn that the key is simplycity. I’ve only upgraded hardware once from the old Athlon, which worked just fine to a newer Ryzen 5

Does anyone use a Microsoft tablet, 2 in 1 or one of these plug in computers as a stage computer?

@ron0ryan1 What computer operating system do you use that doesn’t have many background services running?

Windows 10 defaults are set to run many background services but most of the background services are easy to turn off if you don’t want them running. That’s the whole point of this discussion; for Midi Guitar users to share optimization information that works for them.