Trying to get started - but no sound

Total beginner - Using Jam Origin MIDI Guitar 2, it shows the Audio Interface OK (Focusrite USB ASIO) but connecting my guitar I can’t get any sound, although I do get sound OK via the headphone jack on the Focusrite box. How do I get some sound from MIDI Guitar 2 on my computer???

I’ve tried both options for input, and the only option for output, and still no sound.

are you on windows? then there is a “driver” knob on top to engage your asio config.

Yes, I am on Windows 10 - When I press “DRIVER” nothing seems to “engage” any config, all I get is an information box titled “Scarlett Solo (3rd Gen) Device Settings” and in the box are only these Streaming Settings:
Sample Rate (I have 44100 selected)
Buffer Size (I have 256 selected)
Clock Source (grayed out, not selectable, shows “USB Internal”)
Clock Status (not selectable, but shows “SYNCED”)

The information box settings for Sample Rate and Buffer Size are echoed in the “LATENCY” box in the “AUDIO INTERFACE”, 256@44.1 KHZ.

getting guitar out of the headphone means your interface is connected to your guitar ok. But there is certaonly a knob that balances the direct monitoring vs. the computer sound on your interface.
Do you see VU’s moving on screen? 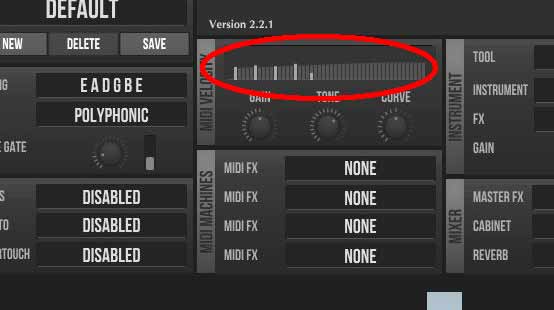 Can you see also this display reacting to your playing ?

can you upload a screenshot of your main MG2 window ?

Yes, there is a Direct Monitor button on the Scarlett Solo, that is on. Even turning the volume all the way up (leaving it at default levels on Midi Guitar 2) there is no indication of any VU anywhere, apparently no signal at all is received by Midi Guitar 2.

Here is a screenshot. 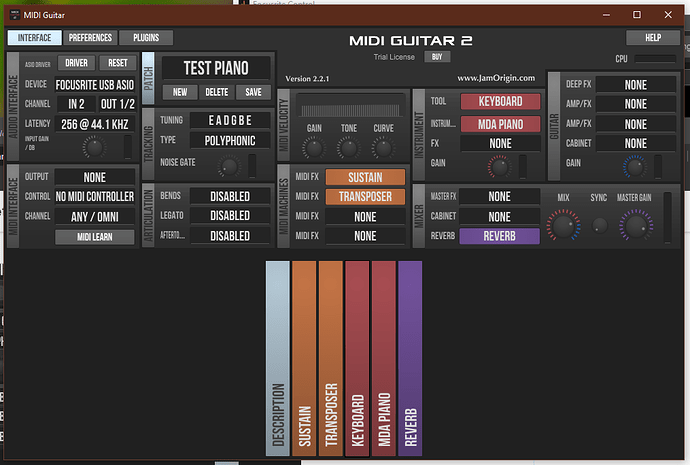 I assume that you have tried with direct monitor button off, as when it is set to on, you can not hear the MG2 sound but only your direct signal guitar.

Anyway it does not solve the problem of the signal not going into MG2. This signal can only be adjusted by the gain control button (and with switch on instrument) .

Yes, I’ve tried with Direct Monitor on and off, no difference. I appreciate your help, but I suspect the problem may be with the brand-new Scarlett Solo. I’ve tried it on 2 Windows 10 computers now, the first one being an i5-8250 CPU, the second an i7-8550U CPU which is about 50% faster.

I did finally get sound from the guitar, through the Scarlett Solo, to the computer speakers on the first, slower computer - but the latency was so bad, 1/4 to 1/3 of a second, that made it impossible for me to play the guitar - I just can’t do it, playing but then not hearing what I’m playing until waaay too much later! So I tried the install of both Scarlett Solo and Midi Guitar 2 on the faster computer, doing the exact same things, but never could get any sound at all.

And in both cases Midi Guitar 2 although it recognized and “saw” the Scarlett Solo, never played anything or gave any MIDI sound at all.

So I’m sending the Scarlett Solo back. Really, Midi Guitar 2 looks easy enough if everything works (I did notice on earlier versions it apparently did have INPUT and OUTPUT labels clearly marked but not on this 2.2.1 version, which might have helped at least some of my confusion LOL).

Thanks for your help, though! Hey, perhaps you could suggest several guitar audio hardware interfaces that are known to work well with the software?

it is unlikely that the scarlet interface does not function
make sure your interface is not chosen for windows normal audio output!
The ASIO driver likes exclusive access to the interface.

No, it’s not chosen for windows normal audio output, but thanks.

If it’s unlikely that the Scarlett Solo does not function, and the MG2 can “see” it but MG2 doesn’t work, then is it the MG2’s fault?

The latency is too long for me, to make this acceptable and usable for me anyway. And having done the exact same steps on two different computers, I’m not crazy about “stuff” that works that way - results that are not repeatable, things that don’t work the same on another device, even though you do the exact same things. And I have computer experience of over 40 years down to the bit level, setting each bit in a word with a manual switch, and then going on to the next word. Do that for a few years and you get pretty good at doing things exactly the same each time.

it is most likely an ASIO problem. I havent heard about his specific one with the Scarlet though.
-what is your windows version?
-are you running the 32 or the 64 bit version of MG standalone?

I was running the 64-bit version of MG2, since both the processors are 64-bit. I did not think to try the 32-bit version.

well, that sounds very up to date.
I have no further info about the Scarlett solo, and also didnt get any complaints in support about Scarlets, allthough they seem pretty common… so I really dont know what is going on.
Personally I have a Steinberg UR22, and MG works fine with the included ASIO driver.

Thanks, I will look at the Steinberg.

I use a UR22 too, but it have not asio multiclient driver, and it is a problem for me.
If I had known before, I would not have bought it.
But if you do not plan to use two or more instances or applications simultaneously, the UR22 is a great and affordable card.

One last question: your scarlett do not work with any daw or sound applcation?

I am not really into interface technique but I just checked the reviews to the Scarlett solo on Thomann’s website, and some folks report big problems with Windows 10.