New To MIDI Guitar 2 & SWAM, I Have Six Questions

Like many here, I have been a guitar synth hardware user for decades starting with the Casio PG380 and the Roland GR33. I still have a plethora of hardware-based gear inclusive of Roland VG-99, Boss SY-1000, Godin Session Custom Tripleplay Guitar, Brian Moore iGuitar2.13, etc.

As much as I love all that hardware, I must admit that once I viewed LoFiLeif using MIDI Guitar 2 plus an MRTAudio Midi Breath Controller plus SWAM (Synchronous Waves Acoustic Modeling) see here https://audiomodeling.com/ I realized that an all-software approach has reached the point where it is superior to my hardware in a number of ways. Not in all ways of course, the major one being discrete hexaphonic pitch detection / audio processing, notwithstanding what MIDI Guitar 3 might be able to do, but that of course remains to be seen…err…heard. Please excuse my ignorance of MIDI Guitar 2 for iOS as I have not used it much, and I do not own MIDI Guitar 2 for Mac.

Hi there @GuitarSynthUser! Glad to have had the opportunity to figure as inspiration to your decision to at least give this setup a try!

Before I address those questions of yours, I’d just want to mention that I am using the TEControl BBC2 Breath/Bite controller and nothing else. It might not be relevant as to the basic breath function, but for those cases where I use any of those other three control options (bite, nod, and tilt), perhaps it is? Now with regard to your questions:

I have some of the GeoSWAM sounds in Geoshred and want to trigger them from MG2, either inside the app or with MIDI out. I get a warning in Geoshred that says it’s not possible. There’s a guy on YouTube who has it working well however, in two different ways: one using a Mosaic script he wrote, and a newer simpler way that apparently does it directly with settings in MG2 and Geoshred. However, despite his attempts to explain, I can’t figure out how it works. Here’s the first method with Mosaic s…

But for me, I haven’t used the GeoShred SWAM instruments myself, so I won’t be able to speak on anything relevant with regard to those I am afraid:

The MG3 upgrade will be free for any MG2 license owner. It is not clear to this date how the relationship between iOS licenses and MacOS licenses is going to be. Updates on that will come on the roadmaps site in time.

Welcome to the community!

Thank you for your kind responses!

Good to know about the TEControl BBC2 Breath/Bite controller, it needs a computer though, but then so does MG2.

Yep it does seem convoluted to use MG2 & GeoShred & SWAM.

My Mac Book Pro is a 2018 so as you mentioned it and my Focusrite Scarlett Version 1 4i4 should be fine (I hope).

I have subscribed to the mailing list and that’s great about the MG3 upgrade being free for any MG2 license.

That’s great MG2 iOS is not slower than MG2 Mac and I do understand there are many variables to obtaining good tracking. I am from the hardware world of guitar controllers and it’s the same there as well. That’s great MG3 is planned for iOS.

True, you need a computer at one time with the BBC2, to make the settings, but other than that it works perfectly fine with the iPad on its own! I forgot to ask, how well does MG2 address MIDI Polyphonic Expression (MPE)? Or if does MG2 uses it at all? Or is there is any advantage to MPE when using MG2 and SWAM?

How do you input both the guitar and BBC2 at the same time with an iPad?

Well, full MPE is somewhere in the not to distant future with MG3, but you can get a taste of it with the MINI version, aimed at our M1 users primarily, but working also for Intel Big Sur equipped computers. New plugin: "MIDI Guitar Minimal" for Mac / BigSur

Video description:
"I got the chance to try the SWAM brass for iPad. They come as both standalone and as AUv3 plug-in. Here is the Trumpet in three variations: harmonic, no, and straight mute. I felt like testing it in the sparsest setup possible for the greatest amount of transparency. Hence: My guitar - wireless transmitter/receiver - iRig/3,5 to the lightning adapter—iPad—MIDIGuitar 2 virtual MIDI out - SWAM Trumpet (Standalone for iOS). Simple iPhone recording room audio. I must say, it is still as good as it has ever been. Take a listen for yourself. I honestly never expected to have these quality playable instruments on my laptop now, let alone on my iPad! It’s crazy when you think about it! A big thanks and congrats to all the @audiomodeling guys for spearheading the evolution of modeled instruments right now.

This (again) changes everything! I tried the SWAM trumpet for iPad the other day. (Above) And happy enough with having the opportunity to practice everywhere without relying on any cumbersome apparatus, I wished anyway I could have used my breath controller for those finer nuances in these very complex instruments. Imagine my surprise when I realized I could accomplish this wizardry by feeding/harvesting audio through the mic/headphone jack and connect the breath controller to the lightning input. So, as usual, some real woodshedding, to make my point. The video & audio is captured by my iPhone as is. I have a little mobile speaker in my pocket connected to the iPad. That’s what you hear (besides my sniffling). I don’t get any more mobile than this (until they release the same software for phones that is!) The guitar of choice for winter sessions like these is an old headless Cort I traded for an Ibanez sometime ago. It is hardly playable with only 5 strings now and dents in the neck and a hideous tribal paint job. Perfect for temperatures down to -20 celsius."

For clarification: I use the 3,5 headphone/mic jack (old iPad) for incoming Audio, and BC via Lightning/USB Camera Adapter.

Thanks again LoFiLeiF, your insights have been most useful, I’m going to buy MG2 for Mac so I can use Logic Pro and Ableton Live and Band In The Box etc. Two questions:

For the guitar I use a low price Behringer USB Audio Interface UCA222, which goes into a non-powered USB Hub (mine has 4 ports, but two will suffice), The BBC goes also into another port of the HUB. The output of the HUB goes into the Apple USB to lightning adapter which also has an input to charge the iPad while you are playing so you do not run out of battery. And, obviously, the adapter’s lightning output hires into the iPad. If you need a photo of the setup just seen me a private message and I’ll mail it to you.

Oh that’s weird, I cannot seem to be able to private message you. 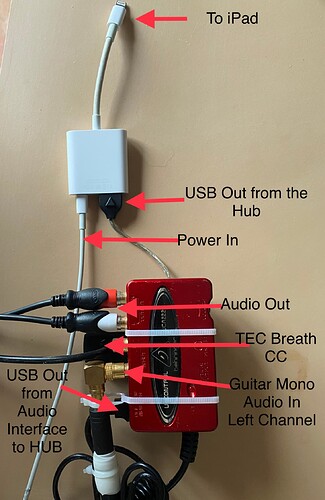 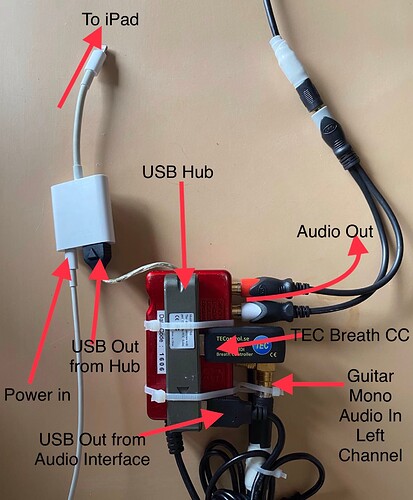 I was not quite sure if I could upload the photos to this site, but here they are. Front and Back , hope its clear. Looks like a lot of cables but it is fairly straightforward. It works . I use it with AUM , which has the Midiguitar2 , the Geoshred and the Mozaic plugin with the GeeBee plugin LofieLeiF made reference to MidiGuitar 2 to play SWAM Tenor Sax On Geoshred | Patchstorage

Ha !! It looks more complicated than what it is, particularly because I wrapped everyhing together so that it doesn’t fall apart when I move around . But in essence its just an audio interfase with a USB hub and the adapter to plug it into the iPad. The Audio Out cable is not necessary , this setup also works with the iPad’s headphone output.
(What I did not show on the photo is that I also have a Fishman Triple Play USB plugged into the HUB too !! I disconnected it for the picture to make it simpler to understand and it was besides the point in this chat.)

I get it! I guess my wireless audio/MIDI setup has that same effect of coming off as complicated, but since it is mine I don’t see that anymore! This being the wireless part for the breathcontroller only, of the whole setup. 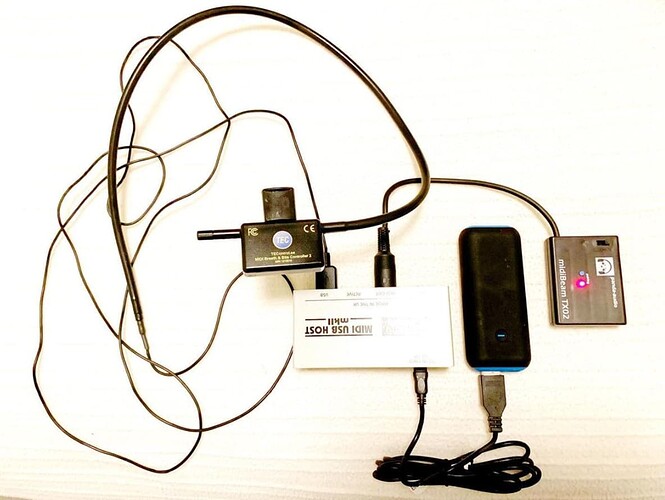 My first audio interface was a Behringer UCA222. Very practical and cheap, I used it to record in a daw.
But the sound quality was very poor, with hiss, audio artefacts and crackles, and unacceptable latency for playing live.
As soon as you start using sophisticated software and host plugins, especially when playing live, you are strongly advised to get a real sound card for audio quality, latency and stability.

Probably bad luck…!! I have a Line 6 and a Focusrite, and I went back to the Behringer, no problems whastoever even for live events. Who knows…mysteries of the technology. Ha, ha !!

You asked about SWAM and sales? I saw just now on FaceBook they have their woodwinds out now 35% off the regular price. That is something at least!