Feature Requests for the Next Version

I saw a youTube video of Jam Origin MG version 3 beta or maybe still in development.

I would think this is as good a place as any for requests and considerations.

I would think that with regards to 1., it won’t be relevant to categorize in different “tunings” with MG3. I’m going to leave it a guesstimation until I can speak on it with confidence though.

Well…you really don’t get it. I have a LR Bagss pickup on my acoustic violin ::: there is NO KNOB.

C’mon now…think outside the box a bit. Why not open this amazing tool to tens of thousands of other musicians who aren’t guitar players??? Violinists, cello players, flute players, sax players…

Don’t be so narrow minded. My suggestion is VALID. Wanting to even out the velocity, even with an electric guitar is a good idea.

Well…, the (curve) knob referred to above is on the software GUI, providing the possibility for every user of the software to be able to even out velocity. That screenshot was from the MIDI Guitar 2 HELP section.

Thank you for requests.

@LoFiLeiF is right - the second feature you ask for is there for ages and very important also to guitars.

As for the first request - the main challenge isn’t tuning or range or number of strings. It is that a good violin tracker isn’t the same as a good guitar tracker. Violins dont sound like guitars. Physics, handling and articulation is all too different. We are making a violin tracker, instead of telling you to use the guitar tracker (which is far from ideal).

My MG3 request would be:

My MG3 request would be:

Midi Guitar is an application that does not require hardware to work: this is its advantage, thanks to which you can change the guitar on the fly.

And that is why it is not possible to have different instruments for each string, because you need a dedicated converter with software + an hexaphonic microphone on each guitar you want to use.

This is not the same approach and the same technology nor the same budget.

It is a choice to be made depending on the way one use his guitar with MIDI functionalities, and mine is all made: I am mostly a live guitarist and not really interested in multi-instrument orchestration. However, I do like to mix the notes on my guitar so that I have different instruments at the same time for different intervals of notes: for example, a bassline for the E2-B2 interval + a piano for the A2-B3 interval, etc.

Obviously, this only works either in standalone mode with several instances of MG2 + filter in Midi Machine slot or with one single MG2 plugin in a plugin host + MIDI filters for instruments.

I use the second method.

@JamO - so the ‘curve knob’ is supposed the compression ratio?

Audio compression has been around longer than I have. It seems a bit odd to kind reinvent the wheel, and make people learn something new. It would be better to call the curve knob compression ratio - if that’s what it controls.

I am HAPPY for sure there is a velocity compressor.

On the violin - yes, the audio output from a violin is much more tricky than a guitar. It usually has EXTRA harmonics, subharmonics and overtones that a guitar generally doesn’t have. There are better pickups coming out (hexaphonic and dual piezo) that produce a more “true” output with less of unwanted artifacts mentioned.

You are correct that Midi Guitar does not require hardware. My feature request would require hardware, so with the Boss GP-10 and a Guitar with a GK pickup (which many of us have on this forum) you can have a separate out put for each pickup. The GK Pickup, as you know has separate pickups for each string and the GP-10 USB output allows for outputting signals for each string.

I’d really like to see the “sustain pedal” functions in Midi Machines also MIDI assignable. Having available the “hold instrument, switch to guitar” would be great, since there’s no way to do that in my DAW except in a clumsy way that involves a few separate steps.

Some improvement in MG’s capacity to fully hold 6 strings chords in polyphonic mode would be wonderful too.

I’d really like to see the “sustain pedal” functions in Midi Machines also MIDI assignable. Having available the “hold instrument, switch to guitar” would be great

Use the knob in the sustain window to assign MIDI CC number (it is set to 64 by default).

Harold, for all I know, 64 is the usual number for sustain.

While I actually don’t know if it would make sense, I wrote that I’d like to see that assignable in the MIDI learn section of MG because nothing happens in MG when I press the pedal. It’s actually working fine in Logic itself—it’ll hold a chord in Alchemy for instance—bur nothing registers in MG. I wish it would work, because the sustain in Logic doesn’t allow a “hold instrument, switch to guitar” function, while MG offers that. There’s a workaround to do that in Logic, but it’s clumsy, needing several steps, which defeats the purpose.

Sorry, I understood that you wanted to assign a cc number to the sustain pedal in MG (standalone or plugin).
I do not know Logic (I’m on Windows).
This function works fine for me, I use it in concert with MG standalone or plugin version in Gig Performer (plugin host software).

Well, I thought of the assign function as a way to have CC64 work in MG sustain Machine, because it’s not working for now. Maybe it is a Logic thing, if it’s working fine for you in Gig Performer.

I’m exploring what direction I want to take to have a laptop-based setup to use live, since I have a new laptop and new interface. While I’m most familiar with Logic, I’ll look into Performer, and Mainstage too, oh and Ableton which a lot of people view as the best for a live rig.

Ableton which a lot of people view as the best for a live rig.

There are many musicians who use Gig Performer with Ableton in the background. By the way, in Gig Performer there is an Ableton sync button 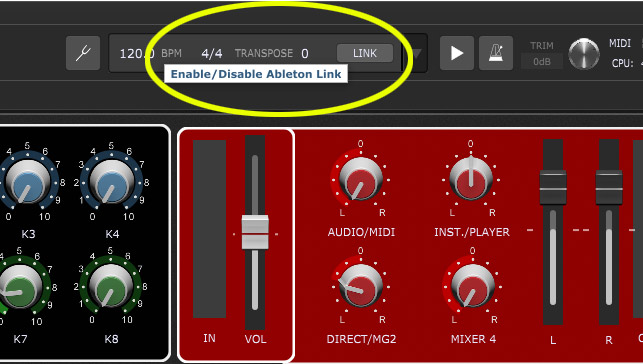 Interesting. Why use both simultaneously? What’s the point(s)?

Why use both simultaneously? What’s the point(s)?

This is an Ableton technology: Ableton link and it can be used with many compatible applications: link-enabled products

Otherwise, apart from Ableton link, it is possible to use in GP the proprietary plugins of Ableton but also of any other daw.

Here is the method to use with Logic:
How to leverage other DAWs’ proprietary plugins from Gig Performer

And as said before,in GP, MG plugin is the root of all my others components, and its instruments, fx and midi machines can be used, and even the sustain pedal MIDI assignment.

Interesting. And amazing the numbers of apps that link to Ableton, while surprising that Logic is not listed considering that many other major DAWs are.

I’ll have to test whether my sustain pedal responds in MG2 if I use MG2 in something else than Logic.

Hi Bernard! Just tried it in Abelton, and it is the easiest thing to do achieve. Just use your sustain pedal input where I have breathcontroller in the picture ) and see to that your sustain pedal CC match MG2:s (CC64 is standard as you know). I have the output set to a software track here, but in. Abelton it works equally as well with the Audio track your MG2 is loaded onto. Kontakt automation - #3 by LoFiLeiF

FRUSTRATED… I want Jam Origin to work like a TRUE, GENUINE ~ AUV3 plugin.
When placed in an audio channel in a DAW or host application, like AUM…it gets the signal through the chain - and NOT directly from the audio interface input. The way it works now is pitiful.

A true or genuine AUV3 plugin can be stuck anywhere in a signal path, and it gets its audio from the “item” or Fx directly in front of it in the signal path. It DOES NOT bypass the signal path and pull audio directly from the computer’s audio interface. That’s not a TRUE AUv3 plugin. This is stupidity, and greed…just be an AUv3, and give your users POWER of the hundreds or thousands of plugins and apps ALREADY out there.

Myself…I DO NOT need fx, and other extra bells and whistles… I’ll use it in AUM or in a DAW (Cubasis, Abelton, etc.) where I’ll choose my own fx and controls, and mish-mash audio however I want. I am the user… I don’t want YOU to control my signal path.

Look at the image below===> Jam Origin, as a true AUv3 plugin, “SHOULD BE” taking the audio signal from the fx or AUv3 plugin directly in front or before it. But SADLY it’s not. It’s grabbing audio from the computer’s audio interface :::: this is soOOOOOooo frustrating, and deceiving. 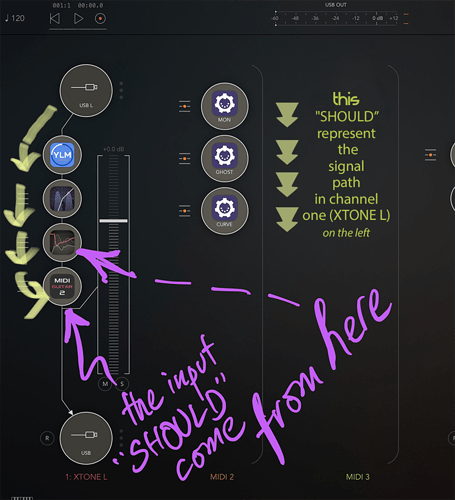